Can’t Clap with One Hand 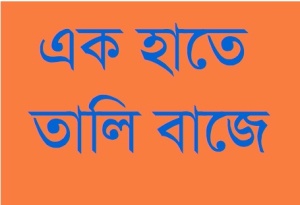 This true report is submitted anonymously. Names changed for safety and privacy.

I met this amazing woman Preeti and her six-year-old daughter today. She was married off at 14 and was taken to her in-laws house in full hijab on her wedding day. At her in-laws’ house she was trained to help her mother-in-law manage the shongshar from cooking to cleaning, to looking after all the male members of the house and producing male off-springs. Preeti was not allowed to go out of the house on her own, a male member of the family would always have to accompany her, and she was not allowed to speak to men without her full hijab on.

Despite all this she managed to give her SSC and HSC exams. In order to make sure P did not forget these rules, her husband would occasionally close the door of their room, and remind her. First it was the shouts, followed by a few slaps, and then the beatings. In a few years time, the rest of the family would join in to carry out the full line of physical and psychological torture that they could think up of.

Despite being a very well-off family, dowry was soon added to their wish-list and that led to further reasons for physical torture. Pregnant in the very first month of her marriage, her son soon grew up to follow family tradition and started participating in the beating sessions. She appealed to her parents many times to save her. A marriage is a holy union, they said, you have to stay loyal to your husband, be a good wife and they won’t beat you.

And then one day she found Facebook, that too on a phone her husband was planning to throw away. She didn’t know ANYONE, but started adding random people as ‘friends’. She soon added some journalists as ‘friends’, people she had seen on TV. Her husband’s family got suspicious because she was spending too much time clicking on the phone but thankfully they didn’t understand much about technology and they overlooked it as she wasn’t ever seen talking to anyone. To cut a long story short, through her Facebook contacts she made her way to Dhaka with help from the journalists and finally landed at a woman’s place, who agreed to let her and her daughter stay at her house. She also got her a job and for a year now with little or no contact, even with her own family. Her life is still in danger as the in-laws are out to punish her.

She has torture marks all over her body and says she’ll never go back and has cut off relations with her parents family because they were so unsupportive. She’s made a whole new set of friends here. Not all are ‘friends’ of course. Her daughter Proma was friends with a girl at school and Preetu used to take her to their house all the time. One day the girl’s mother asked them not to come to their house again because… “amar husband eta pochondo korche na…” (meaning socializing with a woman who had walked away from her husband). Her reply to the woman was awesome. She said, “bhaloi korechen bhabi amake bole, amio erokom bashai jete pochondo kori na.”

She was describing to me how exhilarating it was for her to do things like taking a rickshaw on her own and how apprehensive she was at first to appear in public without a borkha. She’d been wearing it for 19 years! She met me today wearing jeans and fotua.

After feeling very inspired about meeting Preeti I tell my mom all this thinking that she would surely also be thrilled to hear such a story and would be happy that we were hanging out together. But this is what her response was:

She still has to prove in front of the world’s court that she was “innocent”, that she did not “deserve” to be beaten, that she deserves to have… a life!