Home › বাংলাদেশে নারীবাদ › I ask him a very precise question: What do you think about the verdict?

I ask him a very precise question: What do you think about the verdict?

I ask him a very precise question: What do you think about the verdict?
The Saydee verdict, I clarify. The rickshawalla who takes me to Dhanmondi on a hartal day (An innovation of Bangladeshi politics where power politicians play with Molotov cocktails, middle class boys and men and not girls and women play cricket on the streets and working class people go to work 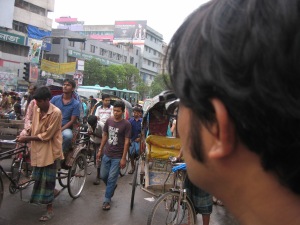 amidst fear of getting stuck by a homemade bomb) pauses a bit:

I look at him with great anticipation. “It is not fair to kill so many people just for one person…law is equal for all…isn’t it? If you have done wrong you have to be punished”

I ask him: who is killing?

“I mean all that is happening, these hartals…at the end of the day I am a rickshawalla…no matter who comes in power I have to eke out a living from rickshaw pulling and today I am scared of coming to roads”. I add, “I am scared too!…..I don’t want to die from a Molotov cocktail”

I keep thinking about the rickshawalla afterwards. How quickly he is down to some basics. He is young, and energetic, half of my age I guess. He does not support all this violence. It appears that he is not so sure about what we often term as state violence. For him things are pretty simple. It is simple math of politics.

It is us who make things complicated. We imagine things which are not there. Violence across the country on police stations and other government establishments by Jamati Islam (who use religion for politics) are read as signs of the rise of Islamism. For me and I am sure many of us this latter phenomenon is an epistemic question, yet to be seen in Bangladesh.

We also see use and misuse of words and terminologies. Death casualties from the clash between police and Jamati activists are termed as genocide. While I condemn all deaths, I also condemn such misuse of terms. In the midst of all this we do not see how children and women are used in the name of saving Islam.

The rickshwalla I speak to reduces things to class. Educated post moderns shy away from such essentialisms, I know. Isn’t this a sin to be an essentialist in this era? I, however, feel close to the rickshawalla today.