Home › আন্দোলন বার্তা › A Country, and It’s Political Voices: The Right to Dream, the Right to Differ 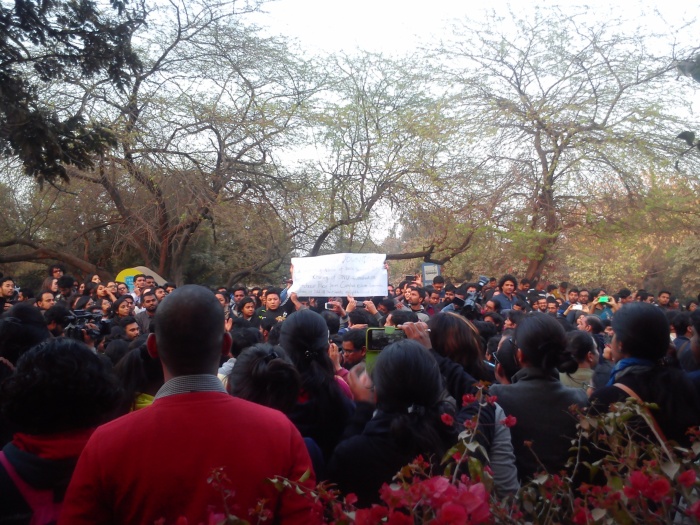 This was first written as an FB post, soon after a nightmarish sequence of events that led to the arrest of JNU Students’ Union President, Kanhaiya Kumar, on charges of sedition, and the news that the University had suspended many others. Since then students and faculty of Jawaharlal Nehru University have lived through an unbelievably bizarre time – of being attacked routinely in media, being called “anti national”, “desh drohi”, “gaddar” and so on. Meanwhile, police has entered campus, conducted raids, students have been in panic – though have rallied around amazingly, keeping their spirits up, and responding with courage and creativity to an attack – not only on them ,and the University – but on their collective futures. The upholders of the “nation” meanwhile speak only abusive language, attack faculty and students inside and outside campus, and have now descended to hacking the JNU library website.

The piece below must be read against this backdrop:

The question being asked of us is are we proud Indians? Are we proud of the nation?

Let me ask – how is the nation being imagined? As an abstract homogeneous entity, based on an exclusionist ideology, or as a complex community of its citizens with enormous differences?

For me, it will always be the latter – and so I am proud of the fact that I belong to a country with a long history of people’s struggles, great battles for defining and defending democracy, where workers have fought pitched battles for their rights, where Dalit activists have not let easy ideas of a non inclusive nation rest. I am proud that women’s movements have grown, changed and challenged multiple patriarchies in the face of grave dangers and repression. I am proud that questions about suppression of rights of ethnic minorities has constantly been raised. I am proud to be part of a community of teachers and students who have been the bulwark of defending democracy – through education, discussion, debate, thought – and struggle. I am proud that i had the opportunity to learn and re-learn that the real lessons of history are made by the people of this country, who are tough fighters and great survivors.

Most of all I am proud that despite all else there has always been, and will always be a vibrant vocal section of indians, across class, caste, ethnicity, gender, regional, religious difference who will battle relentlessly for truth and justice – whatever the attempts to silence them might be.

In the words of one of the bravest indians, Babasaheb Ambedkar – Educate, Agitate and Organize!

The writer is a Professor at Jawaharlal Nehru University, New Delhi, India. This piece was originally published at https://arunimag.wordpress.com/.